Like millions of fantasy football fans on Tuesday morning, I loaded up Yahoo to check my league’s results. I noticed new “Recap” links beside every game result in the “Scoreboard” box. Clicking through out of curiousity, I was blown away by this new feature and jokingly posted this on Twitter:

A lot of my friends are anti-Twitter, but within minutes of the post, I got three retweets! Seeing that we only have eight followers on the FantasyCube Twitter account, I was thrilled. One of the tweets was from the founder & CEO of Automated Insights, Robbie Allen. It was only then that I noticed the company logo at the top right of the new robot-generated recaps. Interested in this subject matter, I read today’s article on popular tech blog AllThingsD via this tweet: 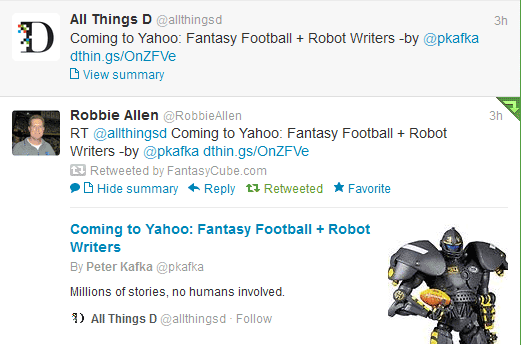 Launched in 2007, Automated Insights was originally named StatSheet, a one man startup by former IBM, Lucent and Cisco engineer Robert Allen. Robbie, as his bio says, also has a Masters from MIT and wrote ten books. Not a bad resume.

A 2008 Crunchies finalist for “Best Bootstrapped Startup” (a tiny site named GitHub won that year), Automated Insights has since raised $5.3M in venture capital to date, the latest round announced today, not coincidentally. See the press release announcing the additional $4M round and name change. Great name, by the way. Their
CrunchBase listing reports nine employees with a headquarters in Durham, North Carolina.

So what is this new feature? The AllThingsD article gives a brief summary of the recaps, but I wanted to go more indepth with screenshots from one of our actual inhouse PPR leagues as well as some features I would love to see. 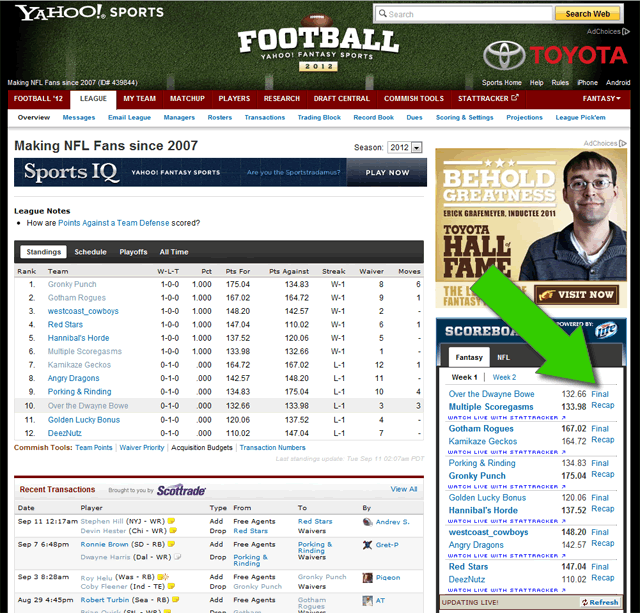 An example of the new weekly robot automated recap articles (note the “Powered By” logo at the top right): 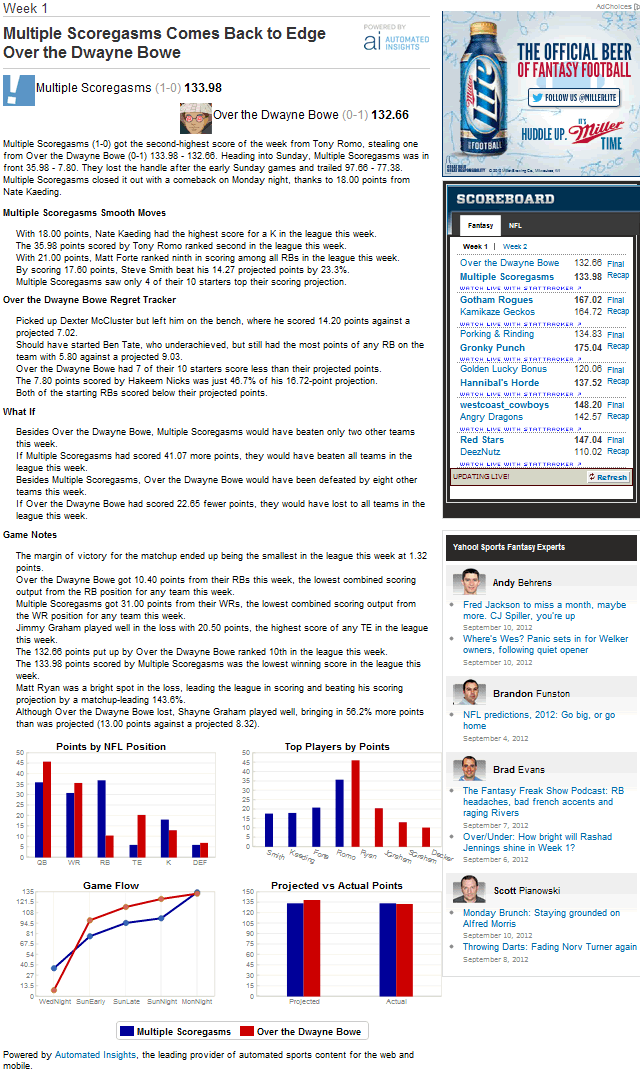 Hats off to Automated Insights for a successful launch. It might be the first time that the fickle web public are genuinely excited and thankful for content written by machines! You can see all the love they’re getting in this Reddit thread.

The “What If” section in particular is very useful. It answers much of the second guessing questions that fantasy owners like to torture themselves with. For example, even in a loss, how many other teams could you have beaten this week? This alone saves you from opening multiple matchups and having to mentally process more stats.

At the end of the recap, the four charts give visual insight on where it all went wrong (or right). For example, taking a glance at “Points by NFL Position” shows that Multiple Scoregasms struggled with TE’s, but had a strong showing from his two RB’s. It would be nice to see the league average here with a dotted line or lighter bar in the background, as can be seen in the mockup below.

The crew at Automated Insights look like a good group who are constantly improving their product and are open to suggestions. With that said, here are a few features I’d like to see: 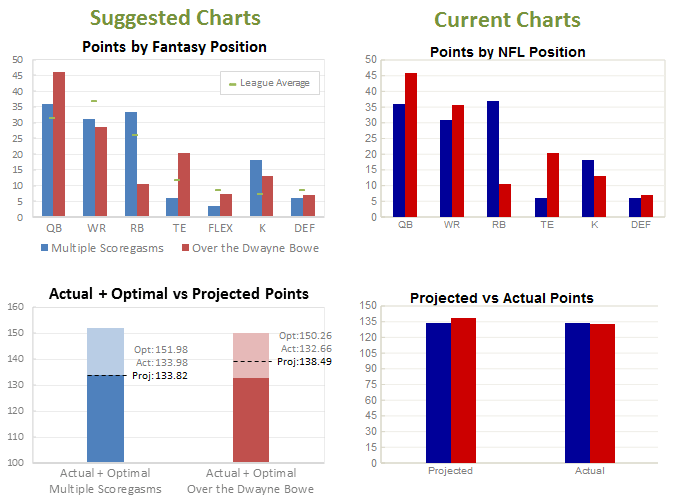 1) Adding a “League Average” marker to the “Points by Fantasy Position” chart.
2) Separating out the Flex position.
3) Adding a stacked column to “Projected vs Actual Points” to display the total points from an optimal lineup. Also add a dotted line for Projected Points.
4) Although the total points are visible in a popup by mousing over the chart (which is a nice feature that shows they care about the little things), it would be useful to have the data values visible on the chart (Opt/Act/Proj point totals).

Another feature I’d like to see that may be more on the shoulders of the Yahoo Fantasy staff is adding a summary of Top 10 fantasy results by position. The example below is from our PPR league with custom scoring (return yards, comp/inc): 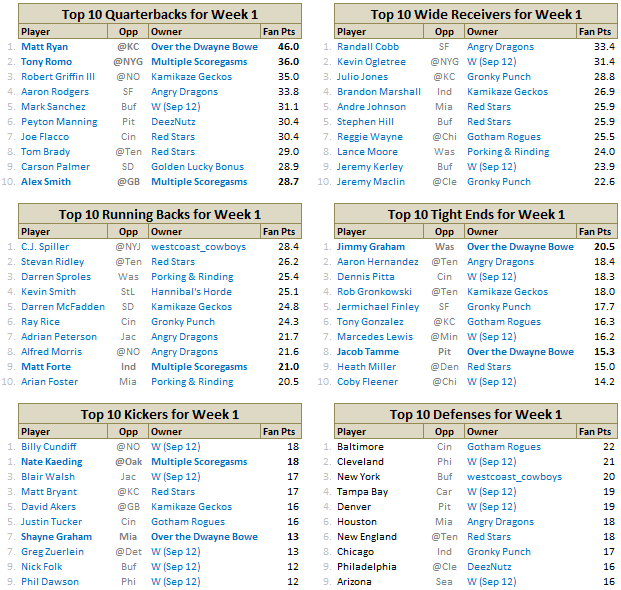 The commentary itself is very readable, which is quite an achievement, considering it is automated. I can’t imagine the hours the engineers put in to tweak this. I’d like to hear a TED Talk about the process one day. Another nice addition would be to have commentary based on the timing of roster moves. For example, who hasn’t done a last minute change of their lineup that either won or lost you a matchup? Under the “Regret Tracker” there is a mention of roster adds (“Picked up Dexter McCluster but left him on the bench, where he scored 14.20 points against a projected 7.02.”), so Automated Insights already has access to some of Yahoo’s fantasy league database.

It would also be nice to have commentary on injuries occurring during the game that may have affected the matchups – i.e. Rashad Jennings exiting the game in the first half, allowing MJD to take the bulk of the carries. If you lost a matchup because of this, you may feel a tad bit better inside knowing you did what you could. This is a very granular level of data which I’m not sure Yahoo records or gives access to, and it would probably increase the query complexity exponentially, but it would be a nice addition.

A final suggestion is for a weekly league wide recap article. I’m unlikely to read any recaps beyond my own matchup, so a league summary in an easily digestable format would be useful. Here is an example, taken from our league again:

And in a matchup of last year’s runner up and third place finishers, westcoast_cowboys (1-0) defeated Angry Dragons (0-1) 148.20 – 142.57, thanks to a great performance by Demaryius Thomas and an overachieving Jets DST.

In a nailbiter, Multiple Scoregasms (1-0) needed a field goal by Nate Kaeding on Monday night to squeak by Over the Dwayne Bowe (0-1) by the slimmest of margins, 133.98 – 132.66. The Charger kicker tallied a total of five field goals on the night, leading all kickers.

In addition, the weekly overall recap could include information about rematches, playoff implications as well as the best individual performances of the season as the season progresses.

Yahoo still lacks the custom options and quality of writers of other sites (CBS, ESPN), but with this new feature as well as last year’s addition of the badge system (who isn’t hopping on the gamification bandwagon these days?), they are showing that the Fantasy Football product is alive and well. I’m excited to see what Yahoo and Automated Insights has in store in the near future.

No Comments.
« 8 Things We Learned from the C...Results-Oriented Team Management »
Signup to our email list and get notified when the FantasyCube spreadsheets are updated!